1 In 10 Brits Would Spend Lottery Winnings

Research reveals that more than one in 10 Brits would invest in cosmetic surgery as their first purchase if they won the lottery.

A survey, conducted by Euromillions, has uncovered a streak of vanity running through our love of lottery tickets.

Of the 4,000 people who were asked what they would buy if they scooped a million-pound jackpot, a fifth of our body-conscious nation admitted they would spend their winnings on designer clothes and 14% revealed they would hire a personal trainer to get in shape.

However, how you much you’d spend on your looks varies according to where you live, the survey suggests.

Liverpool tops the charts with 25% of respondents opting to spend their winnings on cosmetic surgery, while residents in Aberdeen would donate the most to charity (£110,000) and people living in Leicester would share the largest proportion with their family.

Slightly alarmingly, 7% of Londoners revealed they would keep the win a secret from their partner. A breakdown of what the UK would spend their winnings on

A EuroMillions spokesperson commented on the results: “It’s clear that this Christmas there are many Brits thinking of things other than presents and tinsel! However, it isn’t all about cosmetic surgery and designer clothes and many potential winners would give a generous percentage of their winnings to charity and family.”

The big lottery winners in the UK have famously spent their winnings in a variety of ways.

Colin and Chris Weir who won £161m on Euromillions earlier this year donated to many causes close to their hearts, including helping young amputee Kieran Maxwell to buy a prosthetic limb.

Callie Rogers, who scooped £1.9m when she was just 16, blew her whole jackpot on drugs and partying. Since falling pregnant with twins, Rogers has said that she has now turned her life around. 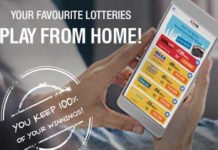 Is it Really Possible to Win the Pick 3 Lottery Consistently? The National Lottery Big Winners – And How They Spent Their...

has anyone ever won a lottery onlie and been paid for...